Skip to content
Only $50.00 more to qualify for free shipping!

Your cart is currently empty. Continue shopping below.

*In order to purchase a subscription item, you must login to an account before proceeding to checkout.

Checkout View Your Cart
We notice you are visiting the United States site from Canada. What would you like to do?
Go to Hoover.ca
Top garage and outdoor tools on sale now Shop exclusive bundle deals before they’re gone! Free Standard Shipping on orders over $49
Register Product
Login

Hoover is Home: A 100 Year Heritage Moment for Everyone

These days, when I say Hamilton, what comes to mind? Naturally, the musical, then the rich history comes flooding in after. History can boil down to a list of facts, but with context and compassion it can evolve into good storytelling. Our heritage is and has always been very hands-on, collectively engineering our way into the homes of millions and even inspiring hundreds of company retirees to start a Facebook Group. While our floorcare history may not naturally be set to rap or ballad beats like the Tony Award winning masterpiece, revisiting some facts from the past may still have the power to entertain as well as stir up some deeply embedded memories of home life.

Hoover recently celebrate the 100th anniversary of the company’s first sales meeting. The Hoover Historical Center, headquartered in North Canton, Ohio hosted the first annual Hoover Park Festival. To all our company vets and new recruits, here’s your exclusive invite to some timeline turning points for us and a handful of truths about Hoover to get truly amped about. 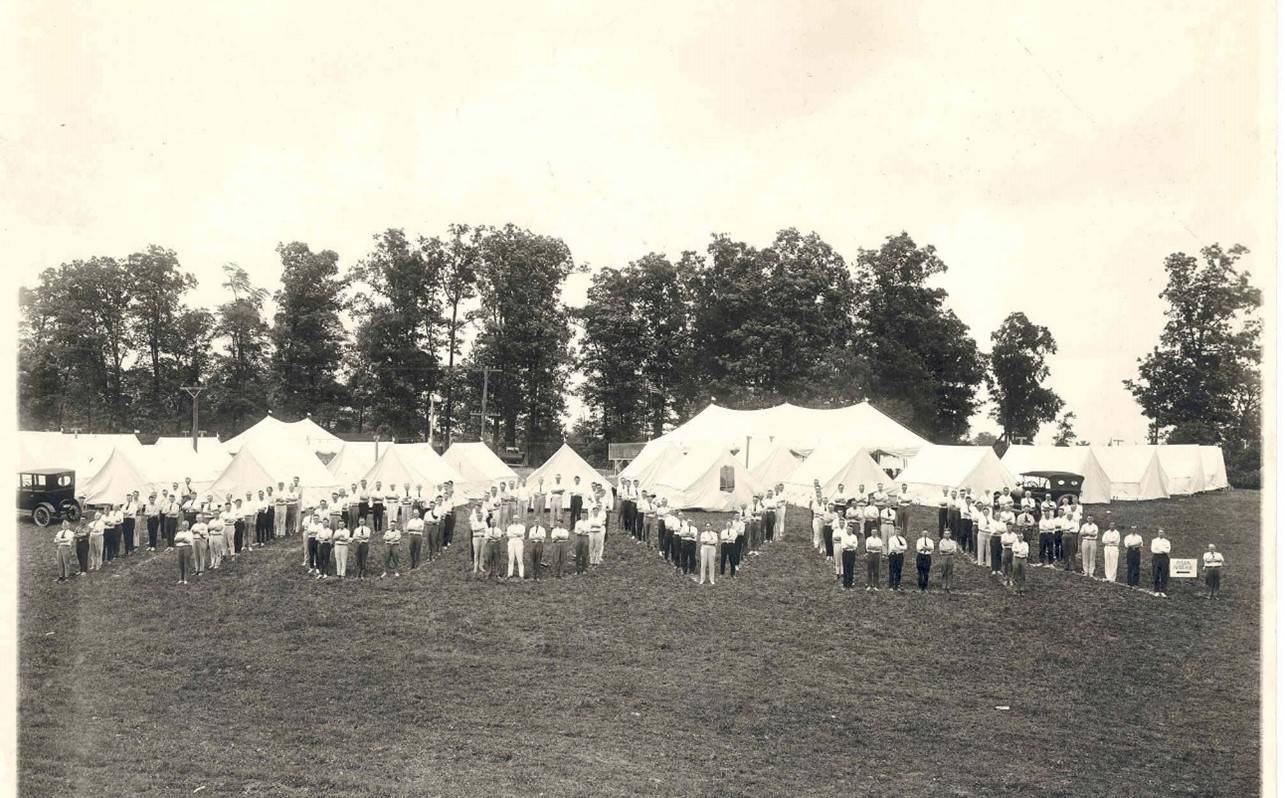 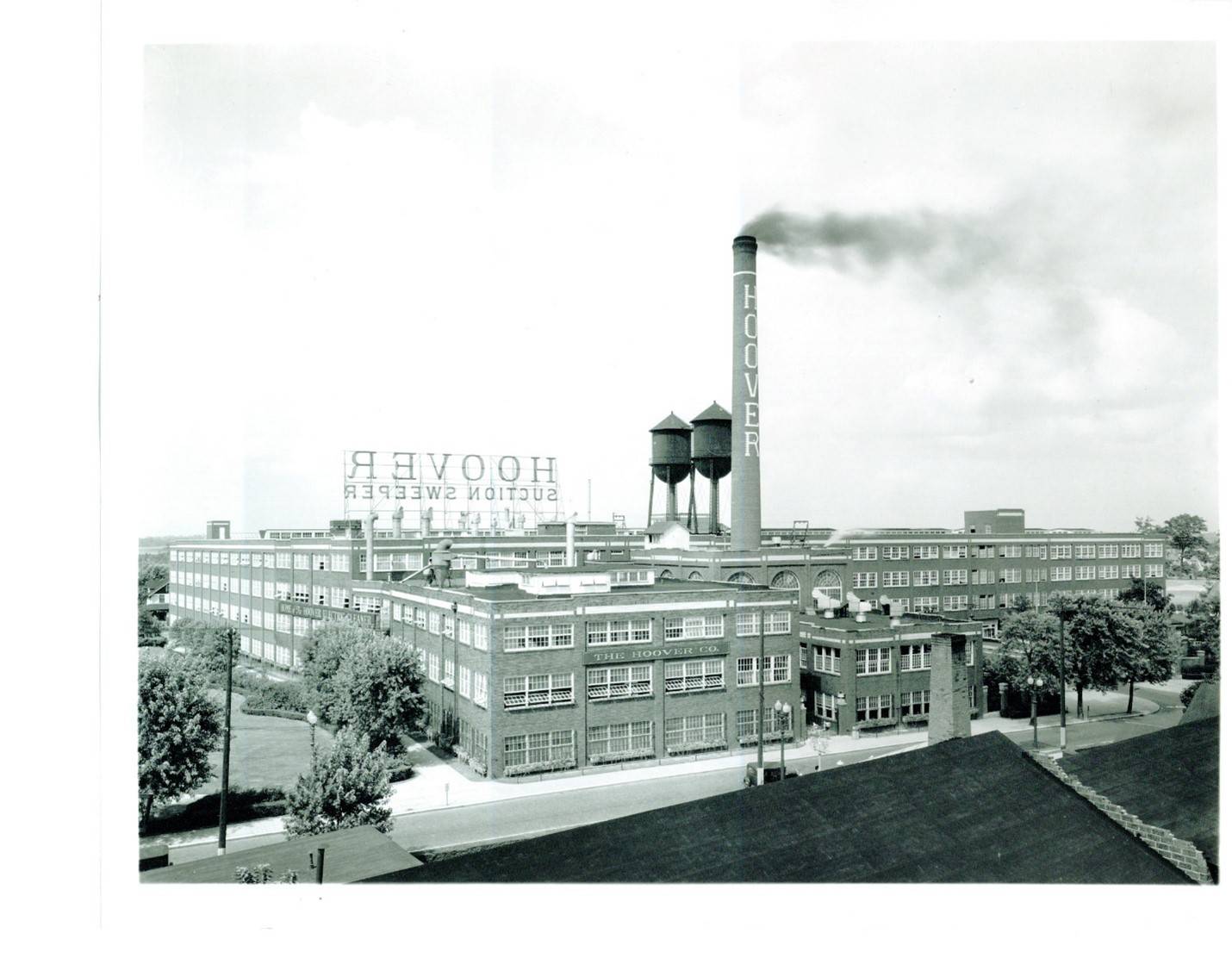 After a spirited sit down with Megan Pellegrino, the Director of the Hoover Historical Center and Museum Studies at Walsh University, I discovered some heart-warming truths about the birthplace and evolution of the Hoover household vacuum. Company pride runs through the Canton community like water, which explains why my opening question of “do you have a Hoover vacuum?” deserved a springy “heck yeah!” So why is Hoover such a big deal and how do you get people excited about floorcare? “In short, Hoover built a town,” says Pellegrino.

The Hoover family sponsored North Canton’s first library, YMCA, firehouse, basically all the vital organs so the community came to life — so the overarching air of appreciation is felt on the daily.

For members of the community, Hoover is a fast family tie, dating back when the company was originally a leather goods manufacturer. Interestingly enough, Hoover Park was originally called Hoover Camp due to a beloved attempt to rally all the top salesmen from around the world into a centralized campsite for a week-long romp full of fishing, dancing, eating and sales coaching with the Hoover execs themselves. They would literally parade these top sellers, aka “Maxy Men” around town, floats and all.

This year, in celebration of those past festivities and more than 100 years of tradition in design, innovation, and marketing, North Canton, OH hosted its first annual Hoover Festival. Even flash flood warnings the night before were not persuasive enough to rain on their planned parade. In spite of the weather, 480 people participated, including Hoover Brand Managers from the Charlotte office. From international sales conventions to employee grounds, the full circle Hoover family effect was complete. A full century of anything is notable but connecting with the local community is an impetus for the company.

The event was a mix of history and fun. Larry Hoover and his son Chuck, the founders of the Hoover Family Foundation, traditionally donate $3 million every year to the community, and this year was no exception. If your corporate event looks and feels like a family reunion, you know you’re doing something right. There’s a deep sense of connection and loyalty in North Canton, but also a hopeful attitude in making new connections for centuries to come. What also may surprise you, is Hoover’s deep connection to the auto industry. With its start as a leather and leather goods manufacturer (est. 1870), mainly for horses, Hoover had a hand in providing things like leather steering wheel covers and seat cushions needed to construct the Model-T in 1903. Soon after that, the family business saw the opportunity that existed in floorcare innovation, and that decision has seen great success over the decades.

Making lines in the carpet

If there was a stand-out influencer in Hoover’s success that deserved mentioning it would be an echo of, “the employees.” The collective work of the employees made Hoover. The company’s appreciation for its Hoover employee family brewed a strong sense of loyalty and connection that went far beyond HEPA filtration and scrub brushes.

Hoover created the first electric residential vacuum for the home (Hoover Electric Suction Sweeper). Because only 10% of households even had electricity, Hoover tapped into a relatively small market with some major swag. Highlighting innovation, design and marketing, the first ad ran in December of 1908 and had a huge impact on the customer experience. Ads offered a free 10-day trial, consumers responded, vacuums were distributed to homes and sales reps followed up to work their magic in conversion. This ad campaign set up the national sales and distribution network which was a first in the industry. Hoover also hired artists to paint artwork for their ads and promotions to dazzle the senses as well as the desire to bring a Hoover product home.

How have we been historically ahead of the curve in the floorcare industry? By leading in design and engineering, of course. Making the next and better technology has been a continuous breath for Hoover. By improving the core design, being the first in electricity, first to feature the agitator brush, allowed taglines like “It beats as it sweeps as it cleans” to become gospel to households around the world. 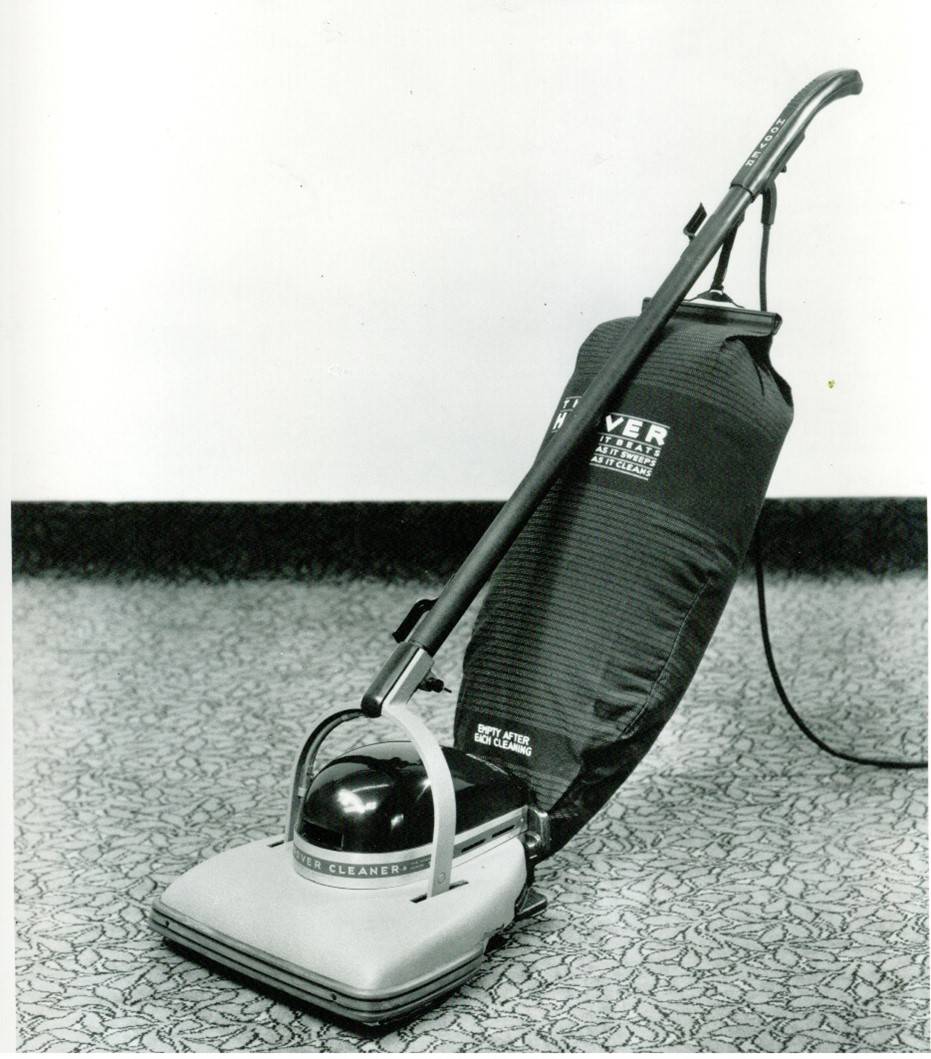 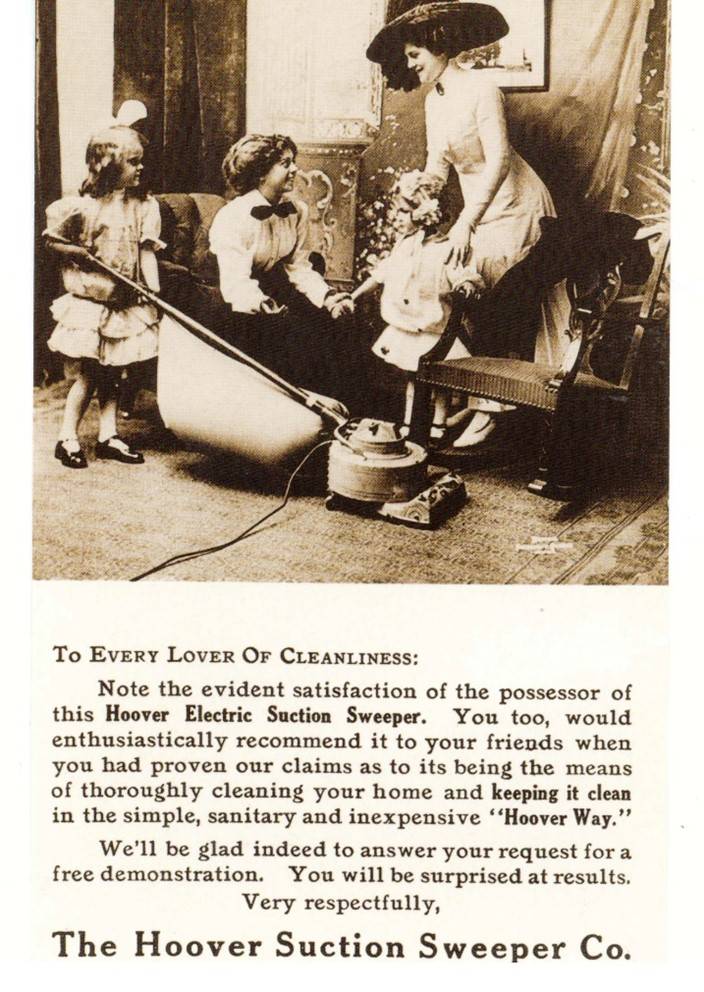 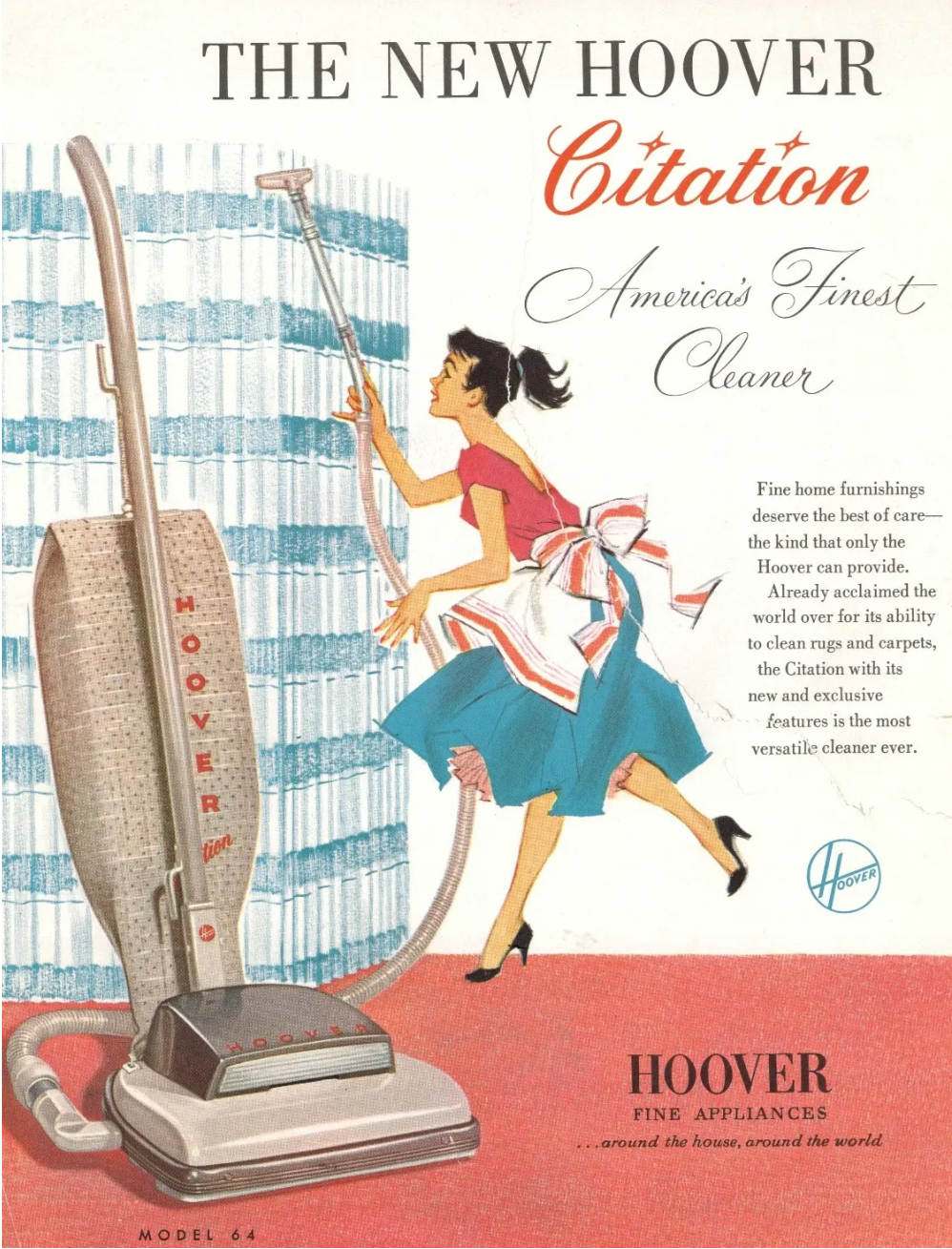 Time to change the filter

Why is floor care our love language? According to Megan, “Everybody has a memory about vacuums. Museum goers will exclaim ‘My grandma had that vacuum’, and then slide into ‘I still have it’.” These items have sentimental weight and instantly connect them back to home. Hoover is proof that home is a powerful feeling. Whether you spot a vintage upright in the museum, or on the hunt for the latest tech tool on the shelf, Hoover isn’t just taking up space in your closet or basement at home, Hoover is home.

Connecting the dots between a vacuum manufacturer and the gravitational need for home is the memory lane most traveled to create instant “Hoover fans”. Even the industrial pioneer Henry Dreyfuss, who designed the Model 150 vacuum cleaner back in 1936, wanted to create a stylish yet user friendly machine. By “designing for the people”, a light weight, revolutionary household appliance was re-invented once again. With our hands on the now and eyes on the future, who knows what masterful and meaning milestones are next for Hoover. Here’s to Hoover and the next 100 years.

To keep your fingers on our historical pulse, feel free to check out the Hoover Historical Center, or sync up with what we are doing in the here and now on any of our social channels Facebook, Instagram, Pinterest, TikTok or Twitter.